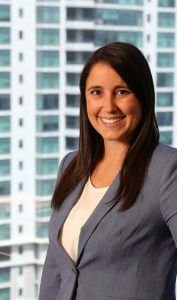 Eden obtained a Bachelor’s of Science degree in Marketing from the University of Maryland in 2011 and worked as a clerk at Fallon McKinley before attending law school. She earned her J.D. from the University of San Diego School of Law in 2015 and received Pro Bono Service Recognition for her work with the California Innocence Project and Public Counsel, the nation’s largest pro bono law firm. While in law school, Eden gained experience interning and clerking with several law firms and non-profit agencies, as a member of the Moot Court Associate Board, and as an Executive Editor of the International Law Journal.

Upon graduation from law school, Eden practiced law at Wingert, Grebing, Brubaker & Juskie, a civil litigation firm in San Diego, CA.  At Wingert Grebing, Eden successfully represented individuals, professionals, and businesses involved in litigation, helping to obtain early resolution for her clients through successful summary judgment motions and settlement negotiations. In the summer of 2018, Eden moved back to her hometown of Seattle, Washington, and returned to work at Fallon McKinley as an attorney.

In February 2019, Eden successfully represented a client in a two-week jury trial involving catastrophic spinal injuries stemming from a motor vehicle collision. The teenage plaintiff underwent a spinal surgery following the collision and claimed permanent injuries. The verdict against the client totaled $4,350.00, which was significantly less than prior settlement offers and less than the costs awarded to the client pursuant to CR 60. Plaintiff appealed the judgment. In July 2020, Eden argued in front of the Court of Appeals of Washington, Division 1, where the Court unanimously affirmed the trial court judgment. In November 2020, the opinion was published as Helmbreck v. McPhee, 476 P.3d 589 (Wash. Ct. App. 2020).